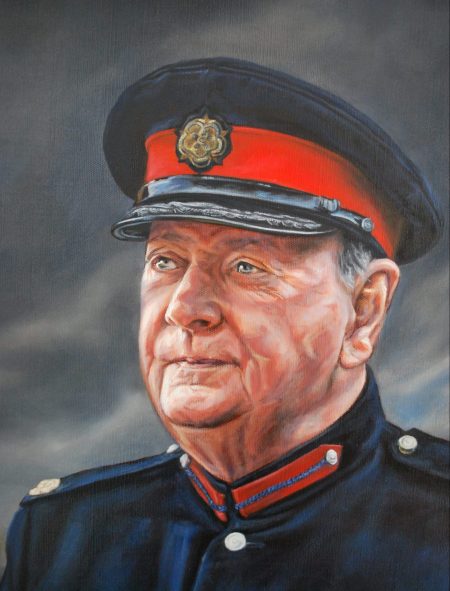 Edward and his wife, Sarah, play a huge role in the local community particularly with regards to conservation.  They also happen to be the loveliest of people.  So, back in 2012 I decided to approach Edward about the possibility of painting his portrait.  I was inspired by the portraits of old, particularly works by Thomas Gainsborough. Edward has such presence and grandeur, and with the title and uniform – really suited this style of portrait.

In between portrait painting commissions, projects, teaching and more, I worked on Colonel Edwards portrait and finally completed it in January 2018.

Every new piece of artwork is a new experiment, though that sounds scary, anyone who tells you they know the exact end result of a painting is not telling the truth.  An ideal result in mind, I know what I am aiming for. I even paint in my sleep (not physically obviously), let’s just say I solve a lot in my dreams and often wake up suddenly knowing exactly how to proceed with a piece of work.

I am pleased to say I am extremely happy with the portrait of Colonel Edward York and I could not have asked for a better reaction from Sarah and the subject himself. Edward and his wife loved the portrait!

To see the portrait in full, please visit my Paintings Gallery