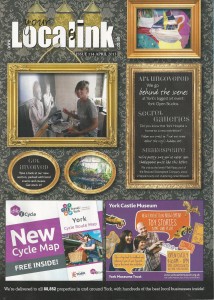 April’s issue of YOUR LOCAL LINK, YORK, took you ‘behind the scenes’ discussing my portrait painting and ‘the best of York’ due to show at York Open Studios 2013.  Here is a section from FRAMING A MASTERPIECE.

Co-founder and now chairperson of York Open Studios, Anne Hutchinson, chats to Your Local Link about the work that goes on behind the canvas to make the festival a success.

Between 12th-14th and 20th-21st April, art lovers across York will flock to the streets to follow their own York Open Studios trail, discovering a wealth of fantastic works right on their doorstep.  With the 13th event taking place this year the festival has become a staple in York’s calendar, and it seems that it’s really made its mark on the city.

…York was doing a good job of hiding its artistic talent [until]…She [Anne Hutchinson] and co-founder Gail Fox went about gathering troops. “We managed to get funding from the Arts Council, and the first year we had 19 people exhibiting, which was great.  It proved really popular.”

The popularity went from strength to strength…

One of the biggest jobs for the organisers is deciding which artists will exhibit their work.  Anyone can apply, but there’s a rigorous selection process to get through before you’re given the go-ahead.  “Having a selection process can be a little controversial as art is a subjective thing,” says Anne.  “We don’t have a set limit on the amount of artists who can exhibit, but as the project is run by volunteers we can’t allow it to run into the hundreds, so we need a way to decide,” she explains.

So, what makes a winning piece?  “We like to display a strong range of media at the event – we get a lot of painters, so we try to balance that out with something different,” says Anne.  “…anything original is fantastic.”

It seems that the work involved in creating an excellent piece of art is worth it, as Anne says York Open Studios is a great springboard.

…Anne thinks that if you’re determined, then you’re half way there.  “I think you need the right characteristics – tenacity, for example – and to be prepared to put in the work,” says Anne.  “It’s 90% perspiration and 10% inspiration…

“There’s a real festival feel to it [York Open Studios], and when you see someone really enjoying their own trail it makes it all worthwhile.  There’s always something unexpected that will surprise even me.” 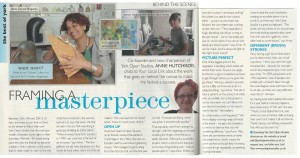