…Actually I am hoping it is more of a very long stroke than just a brush!

As some of you may already know (I did announce it on my facebook page) I was commissioned to paint the official portrait of the previous Vice-Chancellor of the University of Leeds, Professor Michael Arthur.

I believe I received the commission after the University Secretary, Roger Gair,  had visited the Pro-Vice-Chancellor, Professor Vivien Jones, to discuss the official portrait and upon doing so suggested myself because of the oil painting ‘An Evening Online’, which hangs in Vivien Jones’ office and which Gair likes very much.  Around the same time I happened to be exhibiting my paintings at York Open Studios, this gave Roger (and his wife) the perfect opportunity to come and see a wide range of my portraits.  Thinking about it, the way in which coincidences occur in life that seem to put you in the right place at the right time is quite remarkable.

With this portrait being one of my notable commissions yet, I went right back to the great masters’ techniques – highlighting and glazing as artists like Rembrandt would have done.  It took some time to complete the portrait in this way but boy was it was worth it…

This was it, the unveiling of Michael Arthur’s official portrait and what a FANTASTICALLY AMAZING evening it was!  Champagne reception,  beautiful meal, and rubbing shoulders with all the right people: Lord Crathorne and Dame Fanny Waterman to name but a few.

Michael Arthur’s reaction to his portrait was the best I have ever received from a sitter – he was just absolutely over the moon with the quality and likeness.

Comments from guests on the night included:
“You’ve completely captured Michael’s personality – his warmth, cheekiness, and that sparkle in his eyes.”
“Best portrait the university has commissioned in a while.”
“Wish I had known you when I got a portrait of my wife painted.”
“The hands, wrinkles in the shirt and tie, and that gown! I feel as though I could just pick it up and put it on – fantastic.”

Thank you so very much to the University of Leeds, for all the opportunities it has presented me with; both as a student and now as a graduate and Leeds for Life Scholar.

The moment of truth – photographs of the unveiling 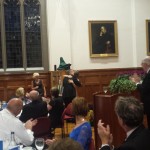 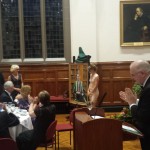 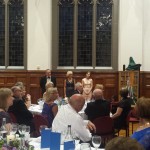 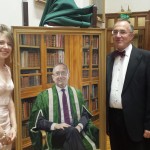 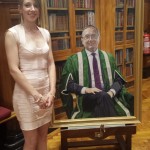